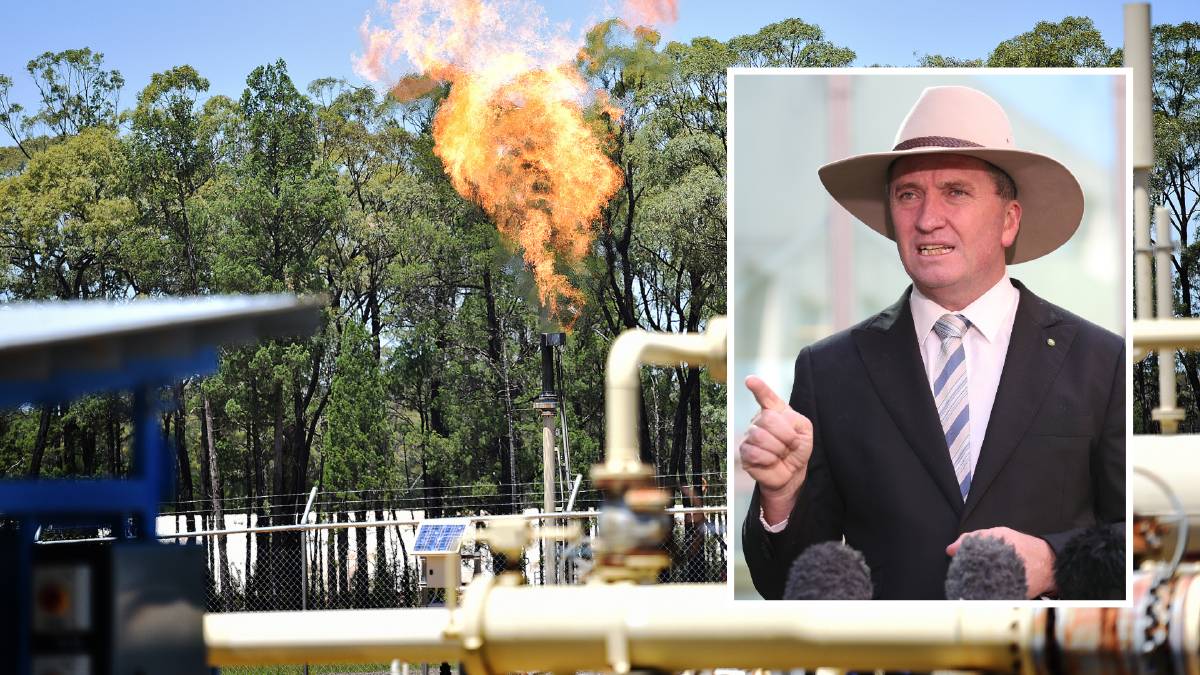 The Deputy Prime Minister suggested farmers deserved one to two per cent of the wellhead head profit.

THERE would be less conflict between the gas and agriculture industries if farmers were paid more to host wells, Deputy Prime Minister Barnaby Joyce says.

The NSW government recently announced its strategic gas plan, which revealed what parts of the state will be opened up to gas mining. Parts of Mr Joyce's New England electorate are covered by petroleum exploration licences, including the black-soil fields of the Liverpool Plains.

The Nationals leader doesn't agree with gas mining on prime agricultural land if it is a risk to underground water sources.

"If it destroys an aquifer, they shouldn't be able to do it, simple as that," Mr Joyce said.

However, the Deputy Prime Minister supports the gas industry and said if the nation wanted to lower its carbon emissions, gas would be an important energy source.

To avoid land use conflicts between the two industries, Mr Joyce said resource companies had to pay farmers more for hosting gas wells.

"Of course farmers lock their gate [to gas miners] because they're being exploited," Mr Joyce said.

"That's not going to change until you treat them like a business partner and say to them 'if we make money, you make money'."

Mr Joyce suggested farmers deserved one to two per cent of the wellhead head profit.

"A signal payment is not good enough, it has to be a fair dinkum return to the landholder," Mr Joyce said.

"Farmers would do a much better job of spending the money in their local communities than the mining companies who shift the profits to their shareholders."

"In the USA - and I'm not proposing this - landholders get up to 25 per cent of the wellhead, and they don't have the land use conflicts we do."

RELATED:Butler offers to work with Nationals MPs opposed to CSG

Some Zombie PELs slayed as future of gas statement released

In Australia, state governments own resources such as coal and gas, the rights to which they sell to resource companies.

If a farmer refuses a company access to their property, they must go into through a court-ordered mediation with the company. If terms are not agreed to, a judge will dictate terms, which usually favour the resource sector.

However, gas giant Santos has promised not to force entry onto farms.

"Santos has good relationships with our landholders and we only enter land and undertake activities when we have agreements in place with landholders," a Santos spokesperson said.

"More than 600 Queensland farmers have shared in more than $70 million over the past five years after hosting Santos infrastructure in rural communities and there are many NSW farmers who are also happy to host gas infrastructure.

"These benefits have helped drought-proof local farms by providing a second source of income from hosting gas field infrastructure."

Mr Joyce was asked about the uncertainty gas exploration licences created for farmers, which often stifles investment due to fears a gasfield will around their property.

However, the Deputy Prime Minister said farmers took the situation in their stride.

"I grew up with mining licences on my family property - they're a pain in the neck but you live with it," Mr Joyce said.

"People have known for ages I have [a PEL] over my property in Baradine, but there's no prospect of striking gas on my place. I just live with it."

Much of the remaining area covers the NSW North West. Nationals MP for Parkes Mark Coulton said he was comfortable with the situation.

"This will certainly put a lot of people's minds at rest," Mr Coulton said.

"It doesn't guarantee that the exploration licence would be granted, and if it was there would be stringent controls and regulations."