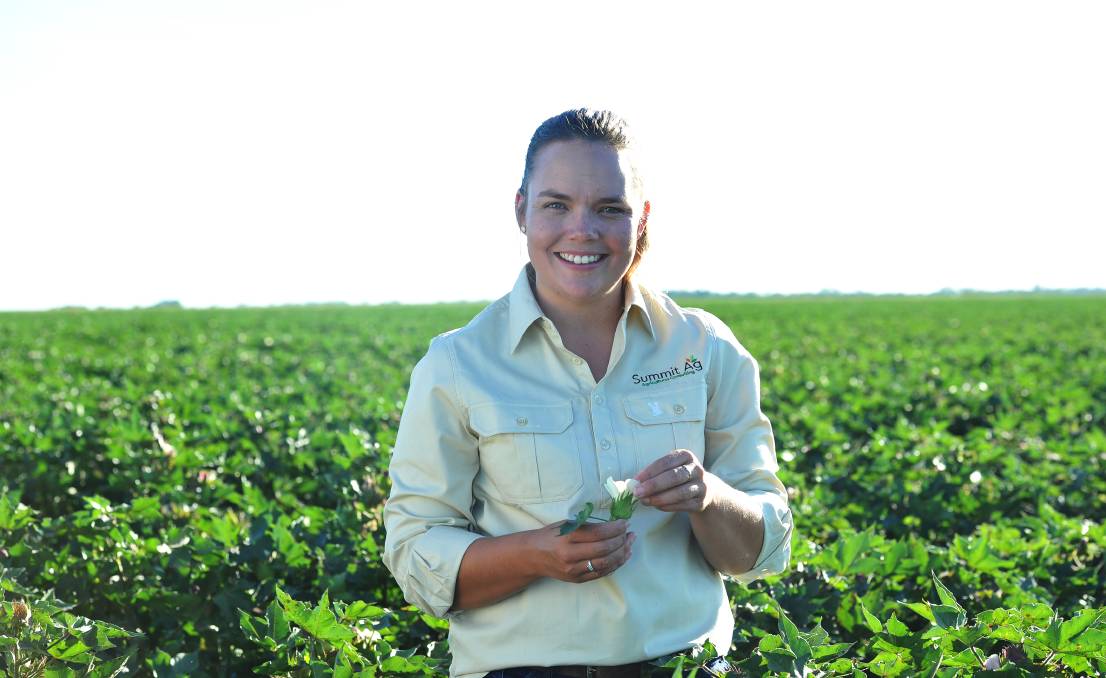 Emma Ayliffe may not be a farmer in the traditional sense of the word, but that has not stopped the Tullibigeal-based agronomist from being named the Young Farmer of the Year 2021.

Ms Ayliffe is part of the growing number of young people in agriculture who wear more than one hat - the 30-year-old is an agronomist, business-owner, researcher, app developer, ag advocate and also helps her partner Craig run their Lake Cargelligo property.

"It was very cool to be recognised not just for the work behind the farm gate but also all the work we do beyond...to try and help other farmers and the next gen," Ms Ayliffe said.

Ms Ayliffe, who co-owns Summit Ag with fellow agronomist Heath McWhirter, grew up on sheep stations in South Australia, so her interest in ag was not a surprise, but her preference for crops certainly was.

"I thought with my background in sheep production I would probably go into animal nutrition...but I just really enjoyed cropping once I got to uni so I graduated with a crop and pasture science degree," she said.

Not long after graduating from The University of Adelaide, Ms Ayliffe was offered an on farm agronomist position at Lake Tandou, near Menindee, where her work was focused on irrigated cotton and wheat production.

"I worked for the company for three and a half years before they shifted me to Hay when they amalgamated with Websters," she said.

"In the amalgamation they restructured and my position was made redundant so I was at a crossroads at what to do."

The crossroads opened up an opportunity to get in touch with Mr McWhirter, an agronomist with Elders in Griffith at the time.

"I rang him up on the off-chance he had a job, he didn't but he made one up for me," Ms Ayliffe said.

The pair have now been running Summit Ag for five years and their work extends from high-input irrigation of cotton to marginal dryland cropping of winter cereals.

"They're two very different operations in the way growers think about what they're doing," Ms Ayliffe said.

"In some respects the irrigation is actually easier because we know we can make it rain, so it's a lot easier to make a decision - our biggest investment is water so everything else is a small input compared to them.

"The dryland is the other extreme, particularly in drier years, the question is what do we actually have to spend money on? What is there a return on investment on?"

Summit Ag is also becoming a prominent player in crop and technology research in the Murrumbidgee Irrigation Area - from studying control options with Whitefly parasitic wasps to prevent sticky cotton, to testing and demonstrating new products.

"We primarily started (research) in cotton and row crops because that's where we saw a market gap, there wasn't a lot of research happening in our area in the high value crops which we knew well," Ms Ayliffe said.

"We're just trying to fill the gaps, where is that knowledge missing for our district and where can we run some trials and test some new products to help growers be at the forefront of what they're doing."

Another gap in the industry identified by Summit Ag was communication - leading Ms Ayliffe and Mr McWhirter to launch social networking app, Yacker.

Yacker aims to connect farmers with other farmers and industry experts, creating a safe space for the industry to share ideas.

People are able to post a discussion question and someone can either comment on the post or ring/text that user directly if they can help. It also allows people to see when users are available to chat.

"If you can catch a farmer at the right time, when they're sitting in a tractor or driving to town, you get a lot out of those conversations, you can get beyond the everyday problem solving to start looking at big picture issues, long-term strategies," Ms Ayliffe said.

"We also know a big part of our job is sharing knowledge, whether that's us going to find expertise from other agronomists, or industry people to bring back to our growers, or acting as a conduit between our growers to share information.

"We thought about how we can create a safe space for information sharing, knowledge building and as a productivity tool to allow people to connect when they have the time to have these deeper conversations."

There are now 615 people on the platform and in its first 12 months they had been able to facilitate a conversation every second day.

Bursting the bubble and tackling misconceptions

Sharing information about ag is something Ms Ayliffe is also passionate about doing with both the younger generations and the general public - an advocacy that began in 2015 when she took part in the Young Farming Champions program.

"That whole program is about bridging the divide between producer and consumer and showcasing to the next generation where their food and fibre comes from," Ms Ayliffe said.

"I thought it was really important, coming from South Australia and moving into the cotton industry I carried with me a fair few misconceptions based on the things that are said in your bubble.

"You don't understand how wrong you are until your bubble is burst and you're forced out of it."

As for the future, don't be surprised to see Ms Ayliffe take on leadership positions in the industry, but for now a key focus will be on farming their Lake Cargelligo property with her partner Craig.

"We purchased (the property) in 2017 right at the start of the drought.

"We run Merinos for wool and lamb production and we crop. This year its about one third livestock, two thirds cropping and the cropping's split 50/50 between canola and wheat.

"We're also looking at taking on his part of his family farm...so we're considering how we set our business up, how do we want our farming operation to run and what are our goals."