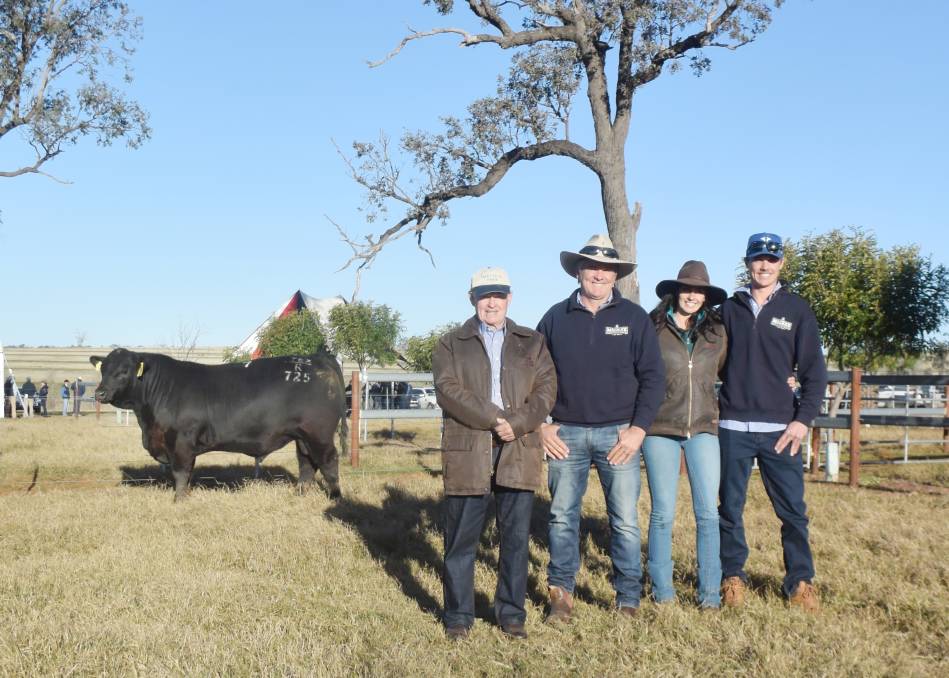 Newest and most aggressive in the commercial beef space, the Mackenzie family, Macka's Beef, have declared their determination to deliver the best black Angus.

With their winning bid of $225,000 sealing the deal on a new Australian Angus sire record, the Mackenzie family of Macka's Beef pinned their bid card to the board and declared to everyone who'd listen - watch this space.

Using the expertise of Genetics Australia, the young sire will immediately enter a collection campaign to yield straws that will improve first the operation's commercial herd, with 1000 of 3500 breeders earmarked for artificial insemination. Some 150 stud cows will follow.

Robert's son Jack, now in charge of the family stud and overseeing the commercial operation, said Iceman's potential brought "predictable performance thanks to the maternal strength of the Texas Undine pedigree".

"Phenotypically this bull fits into our program. He has structural soundness, length and depth, has a moderate frame and great carcase attributes. We will eventually market his semen straws all over the world and we will see where this takes us."

"We are the newest and the most aggressive in this space," he said.

"We are proud to have been the first commercial producer to sell progeny through the saleyards under the new Angus verification program."

Most cattle are finished on several properties across 6000 hectares in the lower Hunter and Gloucester districts and service killed at Casino Food Co-op, with branded Black Angus beef ready for retail sale.

Since the temporary block in trade with China - a country where Macka's Beef had been selling 20pc of its production - other markets have been sourced in the Middle East, under a partnership with Bidfood. Meanwhile, the domestic market remains very strong.

The Mackenzie family buys bulls from a number of studs, sometimes taking home a deck load, like they did at Knowla in 2019.

"We employ Corey to oversee the commercial side of our operation, up-scaling the quality of our commercial herd," Mr MacKenzie said.

"And to assist my son Jack in delivering a powerful stud operation that will directly benefit our business.

"As for Corey, he is a most loyal and committed employee and I value the knowledge he brings to our operation.

"He brings an amazing skill-set to the table when it comes to animal husbandry.

"I think we're lucky to have him in the next phase of our operation."

Where did Macka's come from?