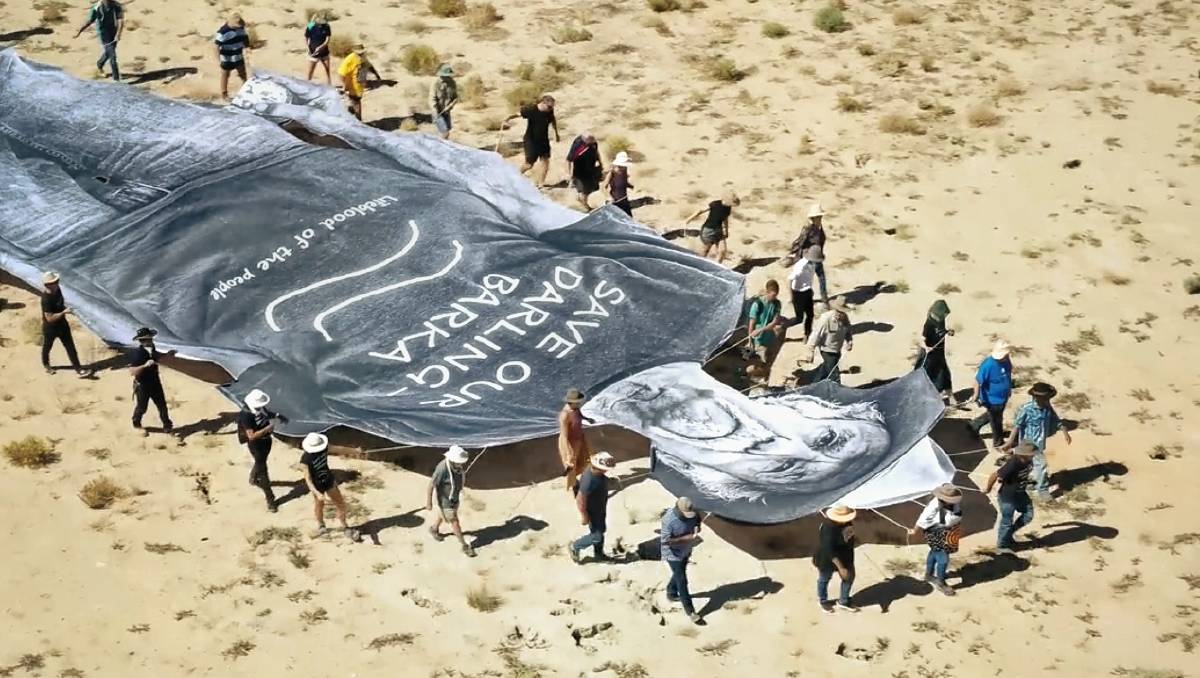 Lower Darling water advocates have been depicted in 30 metre portraits on the dry Lake Cawndilla to highlight the ecological decline of the Darling River. Photo: NGV

Lower Darling water advocates, farmers and local Barkandji elders have been portrayed as larger than life in an art and protest event at Lake Cawndilla, part of the Menindee Lakes system.

The project, part of the National Galley of Victoria exhibition 'Homily to Country,' featured the portraits of farmers Rachel Strachan and Wayne Smith, orchardist Alan Whyte and Barkandjielder Badger Batesand. A statement on the project said it aimed to highlight the ecological decline of the Darling River and the procession was conceived by JR as part of his multifaceted project for the exhibition, which focuses on complex issues of the river system as a consequence of intensive irrigation, climate change and drought.

NGV director Tony Ellwood said the project would give global attention to the environmental concerns of the Murray-Darling with JR followed by more than 1.5 million people around the world.

JR said he started this project in Italy, a long way from Australia, but yet farmers have similar issues: protect their environment and live decently from their work.

"Like many people this past year who were not able to participate in important life moments, I will follow the procession remotely but will surely feel the presence of all the people gathered," he said.

One of the portrait subjects, fifth generation grazier Wayne Smith of Karoola Station south of Menindee, said the event was a surreal experience.

"JR wanted it to represent a funeral procession of the industries and the people who may be lost if the Darling goes dry," Mr Smith said.

"It's quite overwhelming to look at it in that way, it's in the archives now and in the future people can look back and see what was happening here and whether we achieved anything from this point or whether we did go down the gurgler."

Mr Smith said there were 60 to 70 volunteers who attended and helped carry the portraits over a four to five hour procession.

But it wasn't until the NGV organisers showed them some drone footage, that the volunteers could see JR's vision for the project.

"From ground level they didn't look like much at all because the pixels were so big but once the camera picked them up from above they really stood out and it was amazing," Mr Smith said.

He said the best thing about the project was that it brought the issue to the attention of a completely different sector of people.

The live procession was one of three elements in JR's project which also included a chapel-like structure with stained glass windows erected in the NGV's Grollo Equiset Garden and an accompanying film.