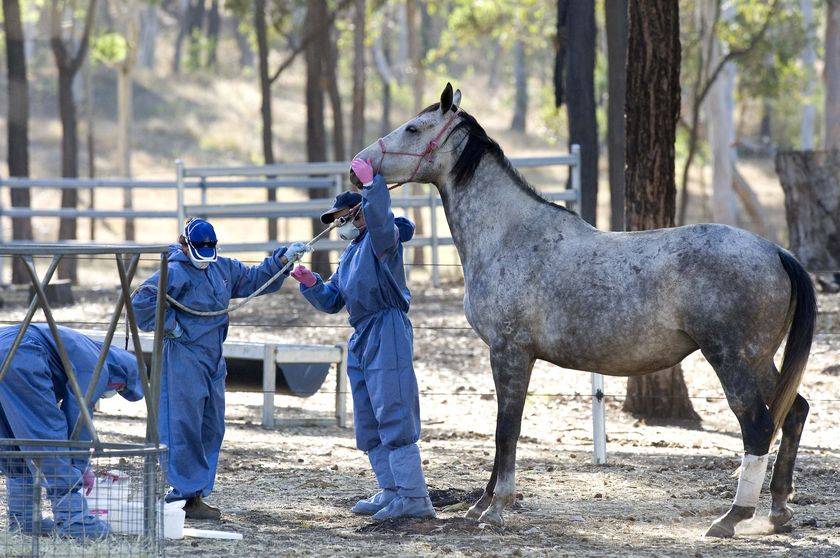 Previously the deadly virus, which spreads from flying foxes to horses, and horses to humans, had only been found in Queensland and parts of NSW.

THE equine industry is on high alert after the discover of a new strain of Hendra virus, which is more widely distributed than previous thought and can be found in flying foxes across the nation

The zootropic can be transmitted from flying foxes to horses, and from horses to people, however had only been found in Queensland and parts of NSW.

CSIRO scientists found the new genetic variation, Hendra Virus Genotype 2 (HeV-g2), in a horse near Newcastle NSW, in the southern most case of Hendra yet recorded.

After monitoring flying fox samples from 2013 to 2021, researchers at CSIRO's Australian Centre for Disease Preparedness found the new genetic type in flying foxes in Victoria, South Australia, and Western Australia.

Previous studies suggested the black and the spectacled flying foxes were the primary carriers of Hendra virus.

However, the new study found the HeV-g2 in grey-headed flying foxes in Victoria and South Australia, and in the little red flying fox in Western Australia, confirming the virus can be found in four species of flying fox and in a broad geographic range of Australia.

CSIRO scientist Dr Kim Halpin said spillover of the disease from flying foxes to horses has still only been reported in Queensland and NSW.

"However, because Hendra Virus Genotype 2 is so genetically similar to the original Hendra virus, there is a potential risk to horses wherever flying foxes are found in Australia," Dr Halpin said.

"It's important to note that Hendra has never been reported to spread directly from flying foxes to humans - it's always been transmitted from infected horses to humans. We expect this new genetic type would behave the same way.

"And given the similarities, while more research is needed, we expect the existing Hendra virus vaccine for horses should work against this new type too."

"This finding really underscores the importance of research into flying foxes - it's crucial to helping us understand and protect Australians against the viruses they can carry."

Victorian Chief Veterinary Officer Graeme Cooke said the discovery was a timely reminder for horse owners to be vigilant about biosecurity on their property.

"Seven of the 11 detections in bats are attributed to [historical] Victorian samples from grey-headed flying foxes collected for other testing, going back to 2013," Dr Cooke said.

"Hendra virus remains a potentially fatal zoonotic threat and as our knowledge increases the assessment of risk may change. The risk in Victoria, though, is unchanged."

"Horse owners should always adopt caution when a horse is unwell and report any signs of illness early. Vaccination is an effective way to prevent infection in horses."

Equine Veterinarians Australia president Steven Dennis said the findings were a reminder to horse owners that there was risk of Hendra virus wherever there are flying foxes and horses.

"Owners and any people who interact with horses can reduce the risk of infection from Hendra virus and other zoonotic viruses through vaccination of horses or humans where available, wearing appropriate PPE, and seeking veterinary attention for sick horses," Dr Dennis said.

Flying foxes are protected animals, with two species on our nationally vulnerable list. They are critical to the environment because they pollinate native trees and plants, and spread their seeds.